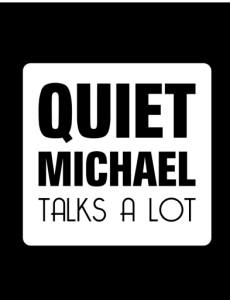 After I said farewell to my sweet friends one afternoon, I happened to glance into an art exhibit. There, surrounded by haunting paintings of naked women gazing at distant explosions of light, was a man. He sat at a small desk and plucked away at his computer, alone. My feet began moving me toward him, toward the exhibit, toward the paintings. I felt drawn to that room like the women in those paintings were drawn to the explosive lights on the horizons of their worlds.

As I walked in, he greeted me warmly. “Welcome, sir. My name is V, please let me know if you have any questions,” he said.

“I’m Michael. It’s a pleasure to meet you,” I replied.

I walked up to each work of art and took in as much of the beauty and horror as I could stand; as much as my imagination would allow me to. I asked him what he thought the explosive light represented. He said he wasn’t sure, but he noted that all of the women in the paintings were facing the explosions and gazing at them. I wondered aloud if they were watching the end of the world.

As V and I began to talk, I learned that he is a graduate student and picked up the gig in the art exhibit as a way to make some extra cash. I told him that I am a student of Divinity and I want to someday be a chaplain. He was perplexed by my response, and asked me what a chaplain does. As I moved to another painting I told him of my work. I explained that I accompany people who are suffering. I told him that my job is to witness their lives and to be present with them during their hardest days. Then he asked me why I want to do this kind of work – why would I want to be a chaplain?

“I wonder if that is why Jesus so often aligns himself with the oppressed, with the poor, and with the suffering. He said that what we do to the prisoner, the naked, the hungry, is what we do to him. For me, that means that when I encounter suffering people, I encounter God,” I said as V stood up and walked over to me.

We gazed at the painting for a few minutes more.

“Maybe it’s selfish of me,” I continued, “but I am moved by the suffering of others. It makes the ground I’m standing on Holy when I look into their eyes. It gives my life meaning to be there with them in the hellfire of their lives.”

“Are you moved by my suffering?” V asked abruptly.

“My name is Vincent,” he said, with tears on his cheeks.

“It’s an honor to meet you, VIncent.” I said, as tears raced from my eyes.

Quite suddenly, the ground we were standing on became holy. We embraced, and said goodbye.